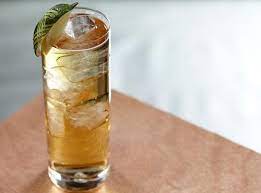 Although it does not include almonds, Disaronno Originale (28 percent abv) is a type of amaretto—an amber-colored liqueur with a distinctive almond flavor.

Ginger ale is a ginger-flavored carbonated soft drink. It can be consumed on its own or mixed with other spirits-based beverages.

Ginger ale is divided into two categories. Thomas Joseph Cantrell, an Irish doctor, is credited with creating the golden style.